THE ONLINE HOME OF INDIANS FOOTBALL!

Your Sequatchie County Indians host the South Pittsburg Pirates Friday night (Indians Stadium, Kickoff 7:00PM) in a non-region game.  It is the season opener for both teams.

The Pirates (Region 3-1A) went (13-1) in 2017 losing to the eventual State Champion Greenback in the Semifinals.   Last season the Indians gave the Pirates all they could handle losing by the score of (28-21). If the Indians had a few more minutes on the clock they probably would have been able to send the game to overtime.

Friday night will mark the first game in Indians Stadium for new Head Coach Mark Wattenbarger and his coaching staff.    Coach Watt who came to Dunlap from Crossville and Stone Memorial HS. He had been the Panthers HC since the school opened in 2009.

Were looking for a big crowd to make their way to Indians Stadium Friday for this Valley Battle!

The Sequatchie County QB Club Officers & Members would like to say a big thank you to everyone that helped make last night's annual BBQ & Scrimmage a sucesses.

Special thanks also to Jeremy Boston, The Dunlap Restraunt and Anthony & Theresa's Homecookin'

Coach Wattenbarger and his staff for being supportive and to anyone else we may have missed. 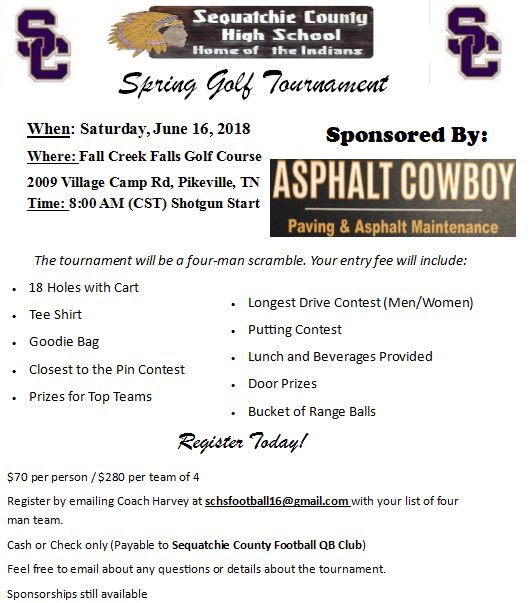 Coach Wattenbarger took over the young Stone Memorial Football program following the 2008 Season it was only the 2nd season for the Panthers Program.

Coach Wattenbarger had a (50-49) record in nine seasons at Stone Memorial. In 2015 he directed SMHS to an (11-1) season and the first undefeated regular season in school history before losing to East Hamilton in the 2nd Round of the 4A State Playoffs.

The Panthers followed that up in 2016 with their 2nd undefeated regular season before losing to Spring Hill in the 1st Round of the 4A State Playoffs going (10-1).

Coach Wattenbarger was the Head Coach at his Alma mater Cumberland Co. from 1997-2005. Where he was named region coach of the year, Coca-Cola regional coach of the year and was selected to coach in the East-West Shrine game in Murfreesboro.

Coach Caine had been the Sequatchie County Head Coach for the last three seasons (His first stint as a HC) and compiled a (26-10) record including a (13-1) season in 2016 and a trip to the TSSAA Semifinals where the Indians lost to eventual Class 3A State Champions Alcoa 24-0.   The best season of Sequatchie Football since the 1973 team that went (12-1) and was the Class A State Runner-up.

During Coach Caine's time with the Indians they went (11-1) against Valley Rivals including 3-0 records over Bledsoe Co. & Grundy Co.  2-0 over Whitwell, 2-1 against South Pittsburg and a win this past season over Marion Co. in the first match-up with the Warriors since 2014.

SCHS Principle Tommy Layne said in a interview in The Dunlap Tribune that a Search Committee had been formed and they will begin making decisions after a couple of weeks of taking Applications.

By the way the Indians travel to Baxter to take on Upperman on Friday October 26 in a game that could decide the Region Championship!

If you would like your name placed in the 2018 Souvenir Game Program!

Then please send your Name, Graduation Year and $10.00 to the address below.

**Please make a note on which you were a member of Football Player, Cheerleader, Band etc..**

RUNNING LATE TO THE GAME & STILL WANT A GOOD SEAT??

The Quarterback Club is will soon be selling Reserved Season Seat Tickets for the 2018 Season these are the Purple & Gold chair-back seats at the top of the stadium.

The price is $60.00 per seat and if you are interested please leave a message on the Facebook Page  or email us .

Remember if you get seats this year you will be able to get the same seats next season or move to a new location as seats become available.